During the spring 2021 "Women in the Church" course, students of Dr. Harald Tomesch were treated to a guest appearance from the author of the best-selling Outlander series, Diana Gabaldon. Below, Tomesch details the experience.

It has been quite a year, hasn’t it? We entertained virtual classes, zoom meetings, and cameras at all times of day and night! There were some really great moments at Concordia University Wisconsin this academic year and I wanted to share one more experience so unique I had to give expression to it in this blog.

“Women in the Church”: A Concordia elective

Dr. Timothy Maschke, professor emeritus, was the last to teach the Women in the Church class here at CUW.  That was a long, long time ago. An excellent historian and friend, he designed the class to touch on significant women in the Church throughout history through the lens of Lutheran doctrine. When it came to redesigning the course I soon realized that my gifts lay elsewhere in New Testament exegesis. So, in the redesign, I turned to the great women of faith in the New Testament. Mary & Martha of Lazarus’ fame, the women in Matthew’s genealogy, Elizabeth the mother of John the Baptist, Mary the wife of Cleopas, John’s woman at the well, Mary the Mother of Jesus (greeting Elizabeth, key figure at the wedding of Cana, a frantic mother with a lost son in Jerusalem, and Mary under the cross), the unnamed woman healed by Jesus of constant bleeding; the unnamed woman who prepared Jesus body for burial and more.

What most Christians don’t realize is that these women are smack-dab in the middle of the Gospels and usually are found at the climax of the biblical narrative. So, I prepared my students for the New Testament world even teaching them some biblical Greek, usually left to a pre-seminarian’s world. I prepared them to read textbooks on the women in the New Testament, including writings about St. Paul and Gender and other similar texts. My goal was to theologize the heck out of the New Testament (a reference to the movie “The Martian,” where Astronaut Mark Watney has to “science the heck” out of the Martian landscape).

Thus, in January we began a journey of three hours every Wednesday evening. The first hour was strictly biblical texts, and the second hour we looked at female authors—all women of a more centrist-Christian viewpoint. Even with these textbooks from Baker I had to move my students to a more thorough biblical and sacramental world.  It wasn’t easy given the permissiveness of today’s culture. And in the third hour I invited guests from around the world to join us to speak to the class in an interview session.

Thirteen guests lined up and were ready to address any question the students wanted to ask. Nuns, pilots, film producers, financiers, doctors, principals, professors and teachers, outfitters, athletes, CEOs, psychiatrists, missionaries from Nigeria, and authors, all women, agreed to grace the class with their presence. Many of my future guests will need to wait until January (Winterim 2022) when we will teach this class again to hear from (hopefully) Supreme Court justices, politicians, governors, and more. Few people realize and know that it takes months to line up a single speaker.

Have you read the Outlander series? My students had an evening with Diana Gabaldon the author of the Outlander series. If you have never read her books she lets her faith shine in the fictional characters she pens. In preparation, students read Diana’s blog, excerpts of the novels, and video interviews. They each wrote two papers on her work, one comparing and contrasting Jesus to the healer Claire Randall Fraser. The week before Easter, Diana came to my class, joined CUW’s Zoom session and we asked her questions about her Roman Catholic faith.  Questions included queries about Jamie and his catechetical foundation, and Claire and her journey from atheist to believer; questions about miscarriages, and women and gay characters and her habitus as a church-going Christian unabashedly witnessing to her faith in the Lord Jesus.

In case you have never heard of D.G., know that her books have become the backbone of a Starz TV series (six seasons and growing) and she has managed to raise the GDP of Scotland by 2% by her books alone. Her work has had an impact on countless lives.

“The Lord bless you and keep you…”

At the close of my classes, I generally pronounce the Aaronic Blessing. During Diana’s visit, I again spoke the words of this benediction, and as I did, she bowed her head. I could not help but think she did the same every Easter and every Sunday. On that night, the benediction came from me to her and to our class, a blessing as from Jesus Himself. What an honor to have her join our class!

Finally, the one inescapable question for each speaker which was asked during the semester was, “What would you say is your single most important piece of advice to these mostly young women, and not a few men at CUW?” (and you cannot say, “Sit up straight and try not to get fat” which is what Claire’s parting words were in a letter to Brianna as she traveled back through time back to her beloved Jamie).

I, for one, was blessed by her and our extraordinary class together in Spring 2021. 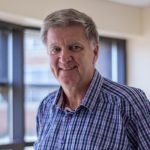 —Dr. Harald Tomesch has been a veteran professor in the CUS system since 1988. In 2014 he was advanced to full professor status at Concordia University Wisconsin. In his career, Dr. Tomesch has taught biblical Greek and is a world-renowned scholar for the Book of Hebrews. From 2005-2008, Dr. Tomesch was President of Concordia Lutheran Theological Seminary in St. Catharines, Ontario, Canada. During his ministry, he began three mission congregations and two Lutheran elementary schools. He is also part of the business community. One of his latest business pursuits is detailed here.