Alumni, School of Arts and Sciences

Two recent Department of Communication graduates, Gina Cuccio ‘20 and Alex Loding ‘21, currently are working in local broadcast newsrooms. Gina works for WDJT CBS-58, and Alex works for TMJ4 News. They have similar jobs, and they determine what people see and hear during news broadcasts.

Gina, an Associate Producer, plans the news broadcast. She decides what stories will air, writes them and adds graphics, and decides the camera shots to show the news anchors. Gina also speaks to the anchors, providing them updates during the broadcast.

Alex is an Engineer/Assistant Director and has many responsibilities. He plans the broadcast, focusing on the technical aspects like microphones and camera shots for the anchors. He sometimes finalizes the “set” in the news studio before the broadcast.

Gina and Alex understand the importance of their work, and it’s also why their job is fulfilling. 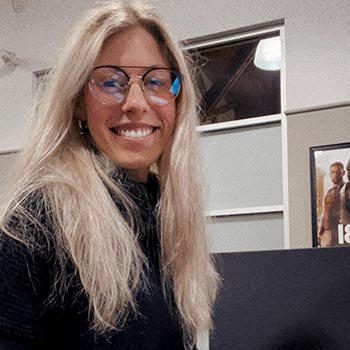 “The part I enjoy most about my job is probably the responsibility that comes with my role. I want to make sure viewers are getting all of the information they need in an unbiased and timely manner,” Gina said.

They also appreciate their coworkers who make the job fun.

“What I enjoy most so far is working with all the people behind the scenes like my other directors, producers and studio crew,” Alex said.

Gina and Alex gained different experience on the path to their current job.

Gina was the student editor for the university’s newspaper, The Beacon, and interned at WISN Channel 12 News. Alex began in the sports media world, interning for the Lakeshore Chinooks and working in the university’s athletic department. He worked for a short time in sales, but soon applied at TMJ4.

Their time at the university helped prepare them for their current jobs.

The part I enjoy most about my job is probably the responsibility that comes with my role. I want to make sure viewers are getting all of the information they need in an unbiased and timely manner. - Gina Cuccio

“I think my role as student editor for The Beacon was one of the best preparations for my current job. I learned how to edit stories so that they would flow easier for the reader. A lot of what I do is editing what I write to make it more concise,” Gina said.

Alex credits his experience with the Lakeshore Chinooks and athletic department for preparing him to apply for his current position. He also thanks the professors who provided news industry insight and expertise.

Gina and Alex represent alumni the Department of Communication and the university can be proud of as they serve their community.