The words were quick off Brooke Hartnell’s lips when Concordia’s nursing faculty launched into a debrief session that followed a December 2019 poverty simulation involving Hartnell and her peers.

The stress came in a variety of forms that day. Some students found themselves evicted from their homes, some were the victims of theft, and some couldn’t overcome the surge of bill collectors at their doorsteps. All of them were living at or below the poverty level.

Even though the CUW students weren’t actually afflicted with their prescribed circumstances on simulation day, students agreed that the emotional effect was, nevertheless, palpable.

“It gives students that hands-on experience,” she said. “Before they have to do it with a real patient, they can begin to build a dialogue in their head about how they could handle some of these situations.” 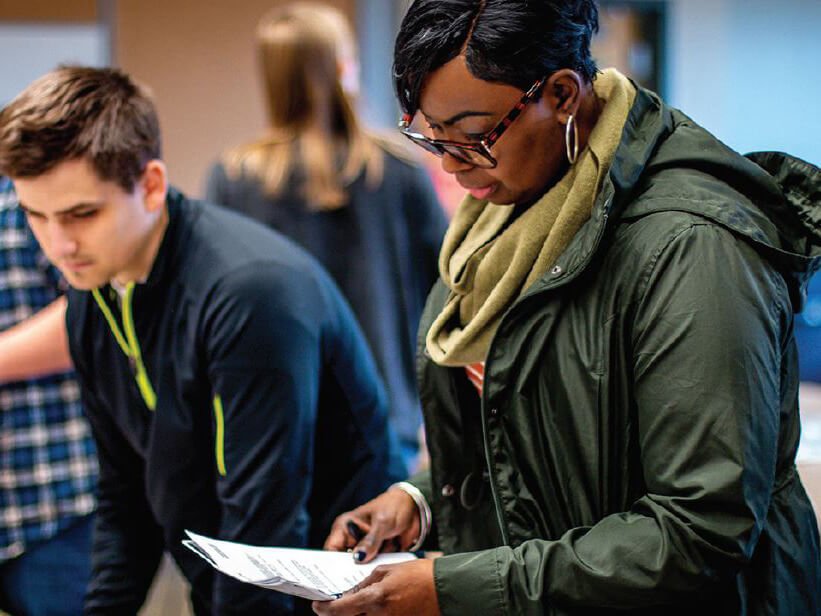 This is the first academic year Concordia has undertaken the poverty simulation in order to help students experience the challenges lower income families can face. The December poverty simulation exercise involved students in CUW’s accelerated nursing and social work programs. Lengyel says there are plans to extend the exercise to undergraduate nursing students as well.

The School of Nursing has made moves to add more simulations at the traditional undergraduate level also. Senior nursing students in the program participated in a simulation this year that involved “Ertha Williams,” an elderly woman who suffered a traumatic brain injury after a fall at home, and students enrolled in the gerontological nursing course had opportunity to experience what it’s like to live with dementia through a simulation presented by the Aging and Disability Resource Center of Ozaukee County.

In the latter, students were asked to follow confusing tasks under the constraints of modified headphones, sunglasses, and gloves. The students became frustrated as they struggled to hear the instructions, forgot a few of the tasks on the list, and couldn’t properly navigate their surroundings.

The dementia experience gave students the chance to truly feel what their patients might experience, said Associate Professor Mary Lou Kopp, PhD, who oversaw the exercise.

“When a patient starts to have difficulty with cognition, there are a lot of feelings of loss and fear,” Kopp said. “Empathy is a huge teacher.”