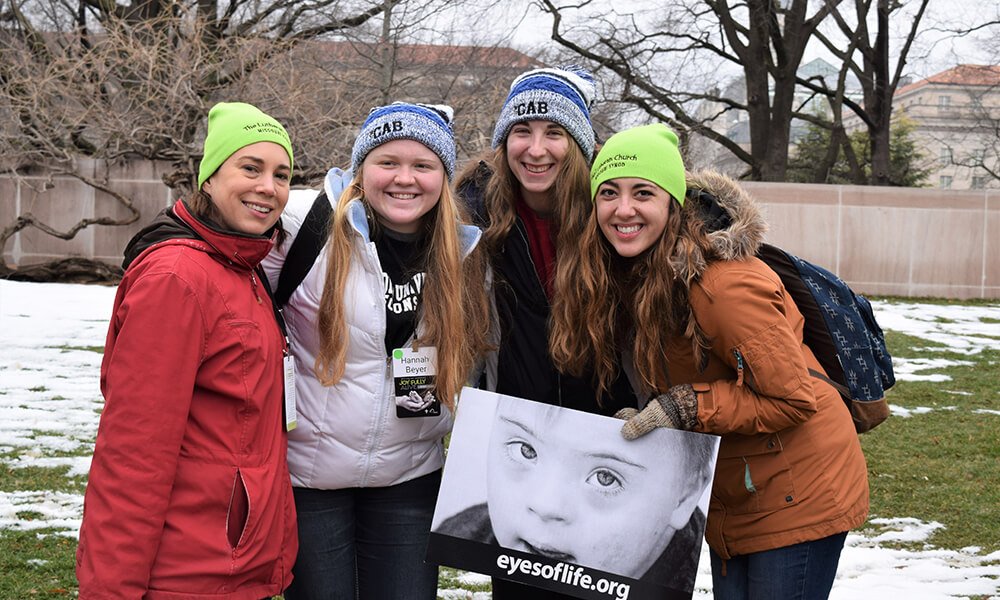 “We are the pro-life generation.” So reads a sign in my office received during one of the annual March for Life rallies in Washington, D.C., that I attended as a chaperone for Concordia. As a 56-year-old pastor, I smile at the irony; high school and college students are meant to carry the free signs.

Studies show that Millennials are more pro-life than a lot of their parents. Because these young people have grown up in a country that has within their lifetimes always allowed legal abortions, the topic is something many of them consider very thoughtfully. They ask good questions.

We’ve had the Students for Life group at Concordia since before I came here 17 years ago. The progression of leaders has been among the most faithful and passionate of our ministries. It’s not the biggest or splashiest group on campus, but rather one with a message some don’t want to hear or vehemently disagree with. For that reason, the group aspires to embody one of my favorite words in the way they carry out their ministry: winsome. I love the idea of trying to be so positive and patient that others can’t help but be compelled by the
love of the Gospel that stands up for life.

Our Students for Life group does more than go to the March each January on the anniversary of the Roe v. Wade Supreme Court decision. It’s a group that’s very active with a local ministry called A Place of Refuge, as well as the national organization Lutherans for Life. It’s a group that’s not naïve or Pollyannaish in looking at the harsh realities and complexity of the issue, but instead embodies dogged determination as we gently but firmly stand—or march— for life.

Being part of the March is something I think that everyone who sees life as a gift from God should experience. Many students who have attended have said that it is life changing. The first time I went—as a middle-aged pastor—I was deeply moved. Maybe it’s something to put on your bucket list—since you’re one who has been blessed with life and been given buckets full of blessing to overflowing from God.

What generation are you a part of? As one of God’s children—one who has been known by Him since before you were born—you, too, are part of the pro-life generation.