The arrival of a Savior for all: Foreword

Editor's note: "A pandemic advent: the arrival of a Savior for all" is a sampling of biblical meditations composed by members of the Concordia University Wisconsin community. It is our prayer that you will take time during the Advent season to read and reflect upon God's Word and await the coming of Jesus with newfound anticipation and zeal through the Holy Spirit.

My 7-year-old daughter began her foray into organized sports this past spring when she joined our Rec Department’s soccer league. Like generations of doting parents before me, I have become a soccer mom! And happily so, because despite the fact that Hannah’s competitive schedule has commandeered our Saturday mornings, it’s a true joy to watch my fearless little warrior test the limits of her physical abilities and to witness those precious moments when concepts introduced in practice are realized on the field.

In a recent practice, Coach introduced an adage to help the girls better comprehend field placement. “Find the light,” Coach explained. “If your teammate were to shine a flashlight out in front of her, would her light be able to hit you?”
In other words, if a defender impedes a clearly lit path to a teammate, reposition yourself. Get yourself into the light and open for a pass.

It’s a simple illustration that—pardon my pun—has effectively illuminated the concept for the team. Now, during games, when the girls begin to clump and huddle around the ball (as every novice soccer player tends to do), Coach calls out, “Find the light!”, and it triggers the players to hustle to new turf.

During the Advent season, we are invited to find the Light anew by the guidance of the Holy Spirit. Each week in church, and sometimes within your homes, an Advent candle is lit. The candles shine brightly in the midst of the darkness, a reminder that Jesus came as The Light into our dark world.

And what a dark world it is! Genesis 6:5b reminds us that every inclination of the thoughts of the human heart are only evil all the time. Because of the evilness that came with the fall of Adam, the world is filled with destruction, pain, sickness, and, yes, a virus run rampant that sows fear and discord among friends and neighbors.

Thanks be to God that He found us in the midst of our darkness. The Light of the World repositioned Himself. He took on the form of man, His station reduced to a lowly stable. Talk about field vision! Though the world did not understand it, He came to fulfill the ultimate goal: Life eternal won for us. In Him is the victory. 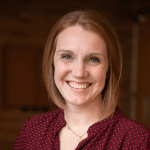 KALI THIEL is the Director of University Communications & Media Relations

View a full schedule of “The arrival of a Savior for all”  readings here.