The arrival of a Savior for all: Tired in the time in between

Editor's note: "A pandemic advent: the arrival of a Savior for all" is a sampling of biblical meditations composed by members of the Concordia University Wisconsin community. It is our prayer that you will take time during the Advent season to read and reflect upon God's Word and await the coming of Jesus with newfound anticipation and zeal through the Holy Spirit.

December 11 – Tired in the time in between

I am often tired. As Bilbo the Hobbit describes, he feels thin…like butter scraped over too much bread. Such fatigue has myriad sources, but professionally, much comes from the burden I know my adult doctoral students carry: the pervasiveness of COVID, troubled relationships, disability, loneliness, and so on—while living in a post-Christian culture that seeks to reorder the desires of their heart. All of which is enough to nurture hopelessness.

Hope is our heart’s orientation to future, and in just about everything, our hope is misplaced. As Isaiah and John remind us, our hope is not found in a where, but a Who. Foreshadowed in God’s revelation to Isaiah that he has laid a precious cornerstone of a sure foundation, Jesus is the central character in the Advent drama, both in Advent past, with God’s redemptive Incarnational Christ, and in Advent future, with God’s coming glory and victory through Christ.

Presently, however, we live in the Time Between. Here Christ is present in Word and Sacrament, but this time of watching and waiting is not always easy. Such challenges are often internal, as captured by poet T. S Eliot, writing on the plight of modern man:

For all of our busyness and plans, we are tired because we fail to heed Augustine’s primary lesson in his Confessions: God, our heart is restless until it rests in you.

In his three short epistles, the apostle John attempts to shake us into our senses. In 1 John, seven times he exhorts that “we know” about the certainties we have as Christians because of who God is. With such assurances in our hearts, how then are we to live in this Time Between? By walking in truth and love as commanded by the Father and demonstrated by the Son (2 John) while supporting one another in the face of challenges and greeting one another by name (3 John).

Still tired? Do not just remember, but live into the resurrection hope, remember the One who was laid as the cornerstone promised in Isaiah, born in the manger, and anticipated in His glorious return. 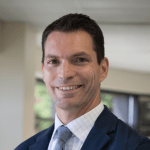 DR. PRESTON COSGROVE is an Associate Professor of Education and has served at Concordia since 2018.

View a full schedule of “The arrival of a Savior for all”  readings here.